The Adventures of BD Movie

The Adventures of BD Movie is a 2004 animated comedy film based on the animated television series The Adventures of BD, created by The AveronDocrandom Team. The film was directed by Bony Ring. It was produced by Warner Bros. Pictures and Cartoon Network Movies in association with AveronDocrandom Productions. It was the third Cartoon Network film that was released in theaters after The Jeremy Team Movie (which it was released on the same year).

Bony Ring, Troy Bottoroff, and Leontev Valeryevich read about a hidden device called the MD-ROM located somewhere within the RDMville city limits that will change the fate of RDMville and the world which depends on the desires of whoever finds it. Unfortunately, while on the search, Hater plots to drill big holes in every construction site in the city so he could search for the MD-ROM himself and rule the world. Once he finally succeeds in doing so, RDMville is turned into Haterville, populated by enslaved RDMville citizens. It's up to Bony, Troy, and Leontev to put everything back the way it was in the first six seasons of TAOBD... or at least the very beginning of the film.

The DVD was released on April 12, 2005, in separate widescreen and fullscreen editions. It was also released on Blu-ray + DVD combo pack on July 5, 2011.

The Adventures of BD Movie: Music from the Original Motion Picture was released on September 28, 2004 by Warner Sunset Records. 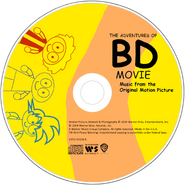 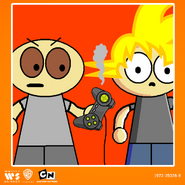 Back interior cover
Community content is available under CC-BY-SA unless otherwise noted.
Advertisement